You are here: Blog Home | The Positive Impact of an Urban Green Roofing Programme

The Positive Impact of an Urban Green Roofing Programme 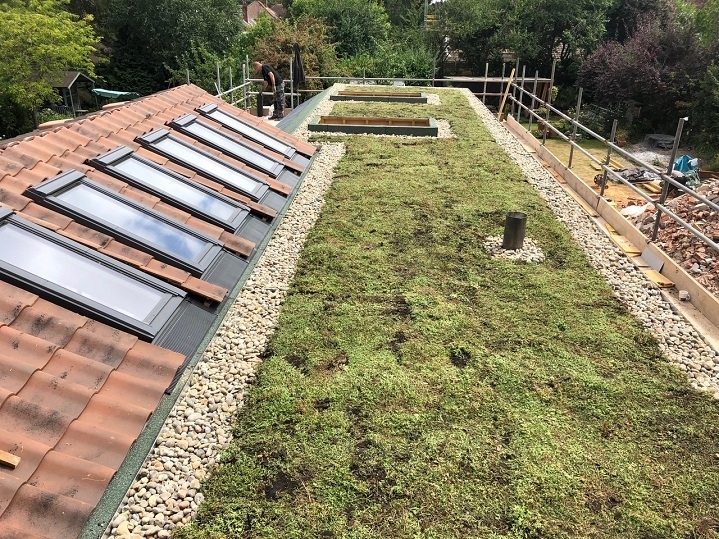 A recent report commissioned by the Mayor of London summarised 10 years of urban greening in the London area. Living Roofs and Walls: from policy to practice details the progress that has been made in the capital in bringing green roofs into the mainstream – there are now 1.5 million square metres of green roofing in the Greater London Area. Across the UK, green roof uptake is growing 17% year on year. Here are some of the benefits that green roofs offer in the urban environment.

When every surface is concrete or tarmac, and drainage systems cannot remove water faster than it is falling from the sky, the conditions are set for flash flooding events. Green roofs are comprised of plants and soil that soak up water reducing the burden on the drains.

Green roofing reduces the temperature of the exterior of a building in four ways: shade, insulation, albedo and evapotranspiration. Albedo is the technical term for the amount of sunlight that a surface reflects – green roofs have a lower reflectivity than other roofing surfaces. Evapotranspirative cooling occurs when moisture on leaves is released into the air during evaporation.

Wildlife can flourish even when a green roof is isolated by its urban environment and elevation. Planting drought resistant native wildflowers on a green roof will encourage wild bees, butterflies and beetles to come and visit. And migratory birds may use a green roof as a stopping off point on a long flight.

Vegetation captures particulates such as soot released by diesel engines – literally cleaning the air that we breathe.

Green roofs can already capture and store as much as 375g of carbon per square metre. Researchers are looking to increase the amount of carbon dioxide that a green roof can store by experimenting with growing mediums that chemically absorb greenhouse gasses.

In dense urban spaces, conventional parks and gardens can be few and far between. Even limited exposure to nature promotes mental health and reduces the risk of depression.

Do you think a green roof could improve your local urban environment? Our experienced roofers can talk you through the options, give us a call on 01603 418818 or email us on enquiries@roofsuk.co.uk.